Honduras and the European Union (EU) have reached an agreement on forest law enforcement, governance and trade in timber products. The agreement will ensure that all Honduran timber and timber products imported in the EU are legally sourced and licensed...... [meer...]

SCA permanently closes its paper machine LWC4 at Ortviken paper mill in Sweden. With this, SCA’s all production of publication paper ... [meer...]

Greif, Inc. announces an agreement to sell 69,200 acres of timberlands in southwest Alabama to Weyerhaeuser Company for approximately $149 million in cash. Proceeds from the transaction will be applied to debt repayment...... [meer...]

Following the Decree on VNTLAS, The Ministry of Agriculture and Rural Development (MARD) issued Decision No. 4832/QD-BNN-TCLN dated November 27, 2020 announcing the List of timber species which have been imported into Vietnam...... [meer...]

Despite special circumstances in 2020, Association of European Producers of Laminate Flooring (EPLF) has announced that their members were able to grow their business by 2.74% in comparison to 2019, with 459.0 million m² of flooring sold...... [meer...]

Germany: Study on the market potential of hardwood products published

A study has identified the potential of hardwood as a substitute for softwood. The results are available in a brochure from the German Agency for Renewable Raw Materials (FNR). There is considerable potential for hardwood to be used in industrial wood, but it is not yet an option as a substitute for coniferous wood in construction...... [meer...]

The German producer price indices for spruce showed an upward trend almost continuously in November 2020, with one exception: Spruce B sections remained true to their negative course with -0.8% to a level of 71.7 points compared to the previous month. Various other ranges... [ meer...] 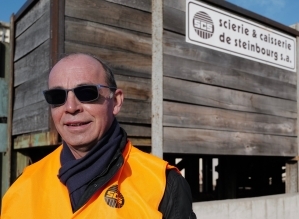 Claude Schnepf heads Scierie et Caisserie de Steinbourg, one of the leaders in the beech market in France with 75,000 m3 processed annually, a capacity which will soon increase to 100,000 m3 thanks to a major investment program. The company exports 70% of its turnover outside the EU (€ 21m in 2019), mainly to China, a market that Claude Schnepf has known for 25 years...... [ meer...]

The strong local and global demand for sawn timber in the DACH region is largely responsible for the – partly long-awaited – increase in prices for roundwood. While increases in the high single-digit to low double-digit range are currently being reported for spruce from Schleswig-Holstein via Bavaria to Tyrol and... [ meer...]